Reason for establishment of the Japan Times Satoyama Consortium

The book “Satoyama Capitalism” soon became a hot topic after it was published in 2013. In contrast to the financial capitalism characterized by the “Lehman shock,” the concept of satoyama gained a strong following through its emphasis on natural resources that have no monetary value, and on the creation of new exchange values that foster a stable future for local communities and introduce a new form of capitalism. Since its inception, the concept has revitalized entire regions by stimulating the usage of previously neglected natural resources and creating jobs for local people.

The significance and results of these activities, however, have not been well promoted and, as such, support for and understanding of these initiatives has not spread.

To promote the vision of “Satoyama Capitalism,” this consortium will promote news of satoyama activity both domestically and overseas by employing the power of the The Japan Times — in both print and online.

The consortium will support the gathering, sharing and dissemination of practical information surrounding satoyama and seek to broaden an understanding beyond satoyama (to other concepts, such as satokawa and satoumi) and deal with related emerging issues such as matching existing industries; marketing new products; logistical networking; inbound tourism and so forth.

We will contribute to an understanding of satoyama by supporting the initiatives of local practitioners, disseminate information overseas, raise overall awareness and contribute to the actualization of a sustainable society. To this end, The Japan Times will actively seeking the support and participation of organizations in this consortium.

What is “Satoyama Capitalism” ?

“Satoyama Capitalism,” which is occurring in multiple Japanese communities, refers to economic activities centered around regional agriculture and fishing industries. Overseas, “satoyama” is gaining recognition as an initiative that activates and sustains regions and communities. 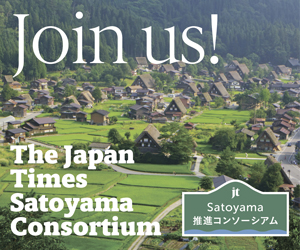