Sorry, but your browser needs Javascript to use this site.

If you're not sure how to activate it, please refer to this site: http://www.enable-javascript.com/

The gravity of ESG commitments will further increase as the global economic circle has moved to place more emphasis on factors such as sustainability and inclusiveness in their business operations, Hiromichi Mizuno, chief investment officer (CIO) at the Government Pension Investment Fund (GPIF), said during a recent forum in Tokyo.

“Over the past 10 years or so, business in Europe and America has increasingly shifted its focus to feature multiple stakeholders and long-term (visions),” said the CIO of the world’s largest pension fund.

Mizuno noted the transitions are partly due to reflections on placing too much emphasis on short-term money making in the wake of the financial crisis that was triggered by the bankruptcy of Lehman Brothers in 2008.

Meanwhile, Japanese firms, once positioned on the other side of spectrum of European and American companies, have adjusted their management styles to those similar to Europeans and Americans, prompting them to further value shareholders and reform their governance, he added.

Mizuno, who assumed the current post in January 2015 after serving as a partner of London-based private equity firm Coller Capital Ltd., said the GPIF has strived to spread awareness of ESG among Japanese businesses over the past two years.

One of the GPIF’s efforts included its announcement of three ESG-related indexes last year, which has apparently helped raise awareness of ESG sharply among Japanese companies, according to Mizuno.

“ESG used to be a technical term among investors, but it is now commonly known in Japan, and even general newspapers have carried articles on this topic,” Mizuno noted.

Additionally, Mizuno pointed out that in Europe and America, investment management companies and valuation firms providing indexes have apparently given more consideration to how to deal with qualitative data that is not measured in numerical terms.

“They have focused more on long-term investment that utilizes non-financial data such as ESG, shifting their human resources to such operations,” he explained.

Therefore, he has called for Japanese firms to use their commitment to ESG as a means to promote communication with foreign investors.

Mizuno delivered his address at the forum organized by The Japan Times on March 12 to mark the launch of the ESG consortium in January that aims to promote ESG engagement among Japanese companies.

After his keynote speech, Mizuno was joined by Ken Shibusawa, chairman of Commons Asset Management Inc., to further elaborate on situations regarding the ESG front. Their discussion was moderated by Hiroyasu Mizuno, executive editor of The Japan Times.

During the discussion, Shibusawa, who founded the asset management firm in 2007, agreed with Mizuno, acknowledging that ESG concepts are widely prevailing among Japanese firms. However, he still feels that they are not yet fully convinced of the necessity of such commitments.

“If they are serious about it, it’s essential to unveil their efforts in a more proactive, engaging manner,” Shibusawa noted. “It’s also important to send such information overseas in English.”

GPIF’s Mizuno stressed that Japanese management should work toward creating benefits to as many as five stakeholders, capitalizing on a traditional sanp?-yoshi business concept that means “benefit for three sides,” — seller, purchaser and society.

“I’d like them to add ‘shareholder’ and ’employees’ to the notion and aim for ‘benefit for five sides,'” Mizuno said.

Echoing Mizuno, Shibusawa said that inclusion of various corporate stakeholders, in addition to shareholders, is indispensable to sustainability, citing Gappon stakeholder capitalism, the philosophy of his renowned ancestor Eiichi Shibusawa, who was called “the father of Japanese capitalism.”

This series highlights ESG (environmental, social and governance) activities of companies and other organizations. 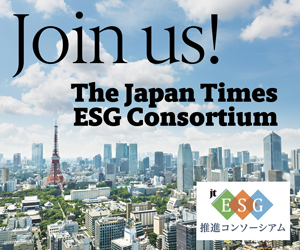